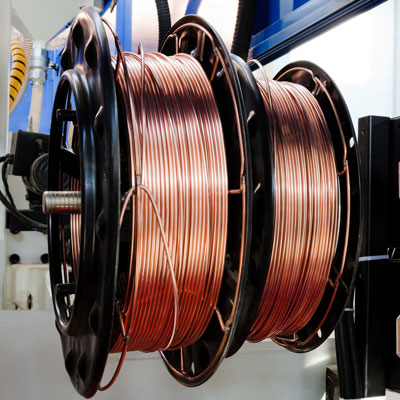 The retailer was victimized four times in the past four years -- the last two incidents just a month apart about a year ago. As a tenant, Accent Southwest did not have to pay for the loss of 100 yards of copper or some $7,500 in electrician fees that resulted from its most recent incident, but lost sales opportunities have cost in excess of $20,000 each time.

"We had no power and customers couldn't see," said Greg Noel, Accent Southwest's Vice President. "We couldn't ring up sales resulting in us being out of business."

With the ongoing recession continuing to hit specific parts of the U.S., copper wire theft has become a way for individuals to make a living. Copper is the essential ingredient in power lines, heating and cooling pipes, and grounding wires—the basic components of the modern world. When this vital element is ripped from buildings, police stations, telecommunications providers – the world goes dark. The results can be dramatic – with cell phone calls dropped, retail outlets being put out of business for days or weeks, police officers unable to respond to crime scenes and city budgets constantly hampered by having to replace the essential metal.

Numerous studies indicate the growing concern of copper wire theft across the country, including one startling report in 2008 from the Department of Energy that estimated the theft of copper wire costs Americans $1 billion per year. Legislation across the country is mounting to put measures in place to thwart stealing of the precious metal and lobbyist groups have formed, such as the Coalition Against Copper Theft based in Washington, D.C. The Copper Coalition has grown consistently since its founding in 2008 with a heavy retail presence. Members include the International Council of Shopping Centers, National Association of Chain Drug Stores, Retail Industry Leaders Association and the National Retail Federation.

Noel says thieves targeting copper wiring "know how to cut the electrical wires even while the power is still on. They cut it 'hot' because they have insulated cutters. Once they cut the wire, a breaker trips and it shorts out. Then the thieves can work two, three or four hours — whatever they need to physically strip the wiring out of the service box, through the conduit and back to the transformers."

After several attempts at trying to avert the perpetrators himself, Noel called ART, which installed and monitors his burglar alarm system. Armed Response Team CEO David Meurer recommended that Noel install Inovonics' commercial-grade wireless monitoring contact sensors within the company's control panel. If anyone touched the panel's door or tried to tamper with it, an alarm would activate, alerting ART's monitoring station in seconds.

ART tested a number of wireless systems before deciding to partner with Inovonics. "We sat down and worked with them to develop the technology to easily, within the building codes, put trip sensors inside of those electrical enclosures that could communicate to an alarm system," explained Meurer. "At the same time, we put in an audio alarm that would make it clear to anyone who touches the container that they've been noticed and that someone is coming."

Inovonics President Mark Jarman says, "Our sensors and wireless devices are ideal for retail environments for a number of reasons. First, wireless offers a level of flexibility that fits the shop floor well. It can easily be moved around to accommodate new merchandising or layout schemes. Second, because it is 900 MHz technology, it is proven to be reliable and durable. People know it works in even the most difficult situations where human safety is critical."

Meurer said he selected Inovonics mainly for those same reasons: "It is wireless technology. That means a lot less labor and time, which made it a more cost-effective solution for Accent Southwest. Second was the fact that Inovonics' wireless transmitters work well inside of a metal box," he added. "Most wireless devices don't. But, because Inovonics uses Frequency Hopping Spread Spectrum (FHSS) technology, it can communicate where most others fail, even within noisy, challenging environments."

Since working with ART and installing the Inovonics' wireless sensor network, Accent Southwest's Noel says he hasn't had any copper wire theft. "The combined system from ART and Inovonics has worked like a charm," he said. "I have to believe that the system has deterred many further attempts at stealing our copper wiring. Even with just one theft prevented, the system has easily paid for itself."

About Inovonics Wireless Corporation
Inovonics is the industry leader in high-performance wireless sensor networks for commercial and life safety applications. Founded in 1986, the company pioneered the use of 900 MHz wireless technology to deliver the most reliable, cost-effective and flexible solutions for critical wireless applications. A leader in security and senior care markets, and the standard for multi-family submetering solutions, the Inovonics family of transmitters, receivers and control modules provides the wireless backbone for many of the world's most widely used wireless systems. Renowned for exceptional performance and reliability, more than 6.5 million Inovonics wireless systems have been deployed in the most challenging of commercial environments, where structural limitations and multiple wireless networks can prove disruptive to lower quality systems. Working with leading OEMs and service provider partners, Inovonics provides network design and system engineering support to continuously advance the use of wireless technologies for corporate, industrial, government and educational applications.
Inovonics Wireless Corporation. All rights reserved.
X